This page explains the many different ways to close an overlay in Unpoly.

In addition to making the overlay disappear, you may also communicate a result value back to the parent layer. This is useful to branch off a complex user interaction into an overlay, then resume the original scenario when you're done. 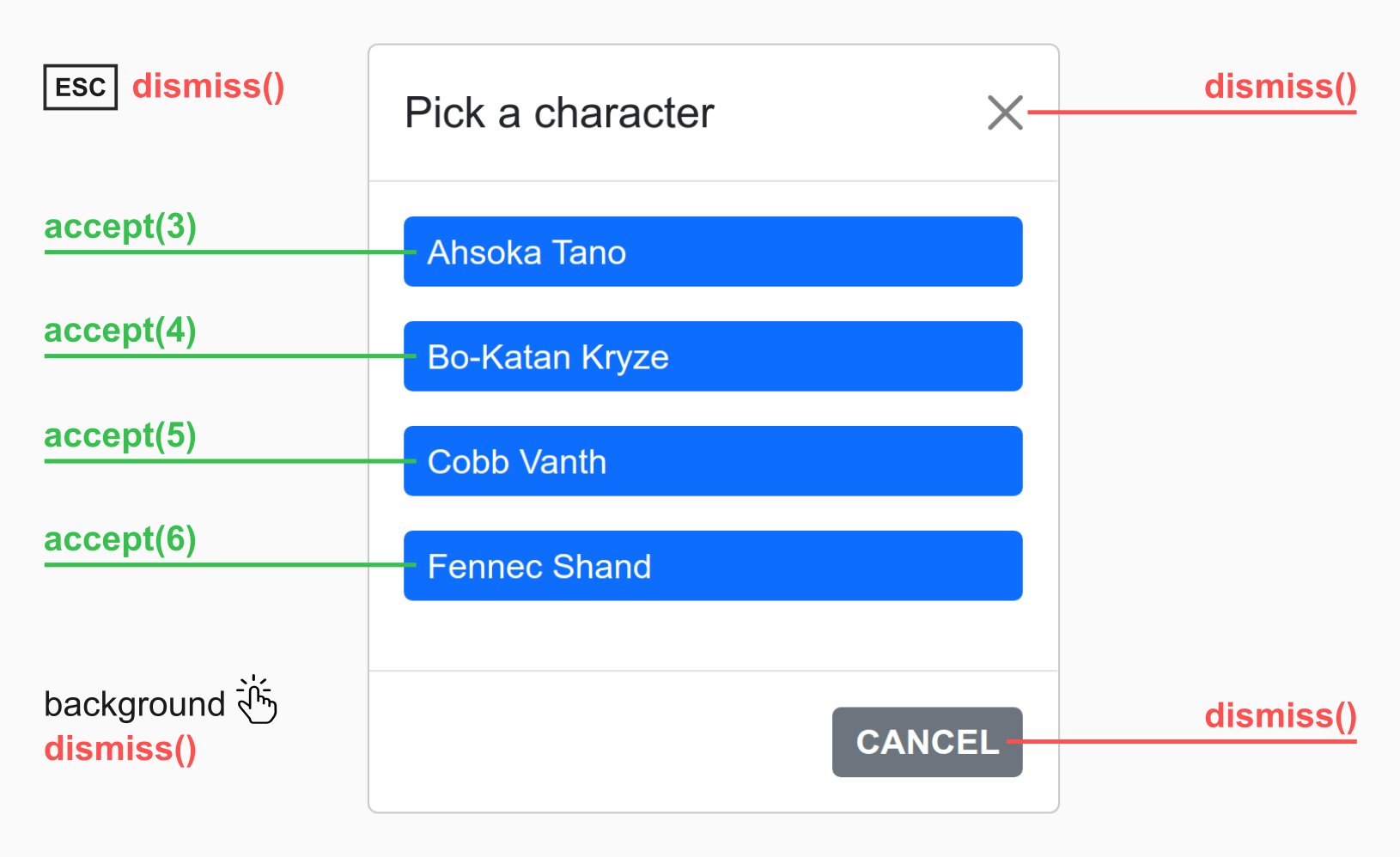 Accepting an overlay will usually continue a larger interaction in the parent layer. Dismissal usually means cancelation. When you're waiting for a subinteraction to finish successfully you're interested layer acceptance, but not dismissal.

When opening a layer you may pass separate { onAccepted } and { onDismissed } callbacks to handle both cases:

Both callbacks are optional.

In HTML you may use [up-on-accepted] and [up-on-dismissed] attributes for the same purpose:

Overlays in Unpoly may be closed with an optional result value.

E.g. if the user selects a value, creates a record or confirms an action, we consider the overlay to be accepted with that value.

You can access the acceptance value from an { onAccepted } callback:

The acceptance value may also be accessed when you're opening layers from HTML:

Result values are useful to branch out a complex screen into a subinteraction.

When opening an overlay, you may define a condition when the overlay interaction ends. When the condition occurs, the overlay is automatically closed and a callback is run.

Closing when a location is reached

The following will open an overlay that closes once a URL like /companies/123 is reached:

To dismiss an overlay once a given location is reached, use [up-dismiss-location] and [up-on-dismissed] in the same fashion.

Closing when an event is emitted

Instead of waiting for a location to be reached, you may accept an overlay
once a given event is observed on the overlay:

When the user:created event is observed within the new overlay, the event's default action is prevented and the overlay is closed. The event object becomes the overlay's acceptance value.

To dismiss an overlay once a given event is observerd, use the [up-dismiss-event] and [up-on-dismissed] attributes in the same fashion.

To emit an event, use one of the following methods:

Closing from the server

The server may explicitly close an overlay by sending an X-Up-Accept-Layer or X-Up-Dismiss-Layer header. Optionally the header may transport a value.

When you're using the unpoly-rails gem, you may produce these headers with up.layer.accept(value) or up.layer.dismiss(value).

The server may also test if the fragment change is targeting an overlay by looking at the X-Up-Mode header.

If for some reason you cannot use a close condition, you may call up.layer.accept() to explicitly accept a layer from JavaScript:

To accept with a value, pass it as an argument:

To dismiss an overlay from JavaScript, use the up.layer.dismiss() function in the same fashion.

Closing when an element is clicked

Use an [up-accept] or [up-dismiss] attribute to close the current layer when the link is clicked:

If an overlay was closed, the click event's default action is prevented and the link will not be followed. Only when this link is clicked in the root layer, there is no overlay to close and the link to /fallback will be followed.

To dismiss an overlay once an element clicked, use the [up-dismiss] attribute in the same fashion.

Closing by targeting the parent layer

When a link or form targets a parent layer, the current layer will close when the parent layer is updated. This behavior is called peeling.

The example below uses an [up-layer] attribute to update the parent layer after a successful form submission. This will automatically close the form's own overlay:

Note that the form will still update its own layer when the server responds with an error code due to a validation error. To target another layer in this case, set an [up-fail-layer] attribute.

By default the user can dismiss an overlay user by pressing Escape, by clicking outside the overlay box or by pressing an "X" icon in the top-right corner.

You may customize the dismiss methods available to the user by passing a { dismissable } option or [up-dismissable] attribute when opening an overlay.

The option value should contain the name of one or more dismiss controls:

Regardless of what is configured here, an overlay may always be dismissed by using the up.layer.dismiss() method or a[up-dismiss] attribute.

The overlay element's disappeared will be animated using the layer mode's configured { closeAnimation }.

To use a different animation, pass an { animation } option to the various close methods.

Instead of using up.layer.open() and passing callbacks, you may use up.layer.ask(). up.layer.ask() returns a promise for the acceptance value, which you can await: